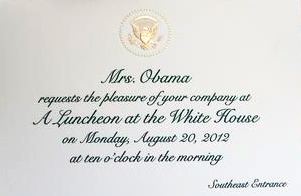 (2017 UPDATE NOTICE: Unfortunately, the Let’s Move website is no longer active since Michelle Obama is no longer the current First Lady.

You may find that previous availability of recipes and information from the Let’s Move program may have been scrubbed from other government related websites as well.)

As part of Michelle Obama’s signature “Let’s Move” campaign to end childhood obesity in America, on Monday, August 20, 2012 the first ever Kids’ “State Dinner” as a formal luncheon is scheduled to celebrate the winners of the 2012 Healthy Lunchtime Challenge. Selected healthy focus recipes were featured at the luncheon. (Image of invitation to the 2012 Healthy Lunchtime Challenge shown for identification purposes only).

A total of 54 winning budding chefs and one of their guardians / parents were invited to this special formal luncheon dining event. According to a video on the letsmove.gov website and various newspaper stories run on the winners, over ~ 1200 recipes were submitted from all 50 states, the District of Columbia, and 3 US territories: Northern Mariana Islands; Puerto Rico; and the Virgin Islands (but there could only be one winner from each of those locations).

Winners (a US legal resident child between the ages of 8-12) and one US legal resident guardian/parent became eligible for round trip flights to Washington DC and hotel accommodations so that they could attend the August 20th formal luncheon being broadcast live starting at 10 AM from the White House in Washington, DC. In a number of cases, it is reported that a second parent may choose to pay their own way to the special occasion since it is so meaningful to the families of the winning junior chefs.

It has also been reported that the children will receive a special “tour of the White House vegetable garden” with one of the Obama’s chefs as well as participate in a “behind-the-scenes tour of the Julia Child exhibit at the Smithsonian” before it becomes available to the general public.

Read on for some additional details about the contest and the recipes chosen.

“Each of these young people worked with their parents to create an original lunch recipe. We asked them to design a dish that was healthy, affordable, and tasty — and which met the nutritional guidelines set up by the U.S. Department of Agriculture” according to information in a press release email from the White House sent and received on Sunday, Aug. 19th.

Entries into the 2012 Healthy Lunchtime Challenge were judged based on a 100% scoring system, which if converted into 100 points would in effect allocate points as follows: 50 points for the nutritional value of the recipe; 25 points for perceived taste; 15 points for creativity and originality; 5 points for affordability; and 5 points for the [back] story behind the recipe development.

Participants in the panel of judges to determine the 54 winning recipes included the Editor-in-Chief at Epicurious (Tanya Steel), representatives from the Dept of Education and the Department of Agriculture, Chef José Andrés (a well-known Spanish origin chef who reportedly has sometimes been credited with bringing what is called the “small plates” concept to America as a take-off on the tapas theme of eating so popular in Spain), White House Assistant Chef Sam Kass, and even a family that turned their eating style around spearheaded by the son in the family, Marshall Reid who then coauthored a book “Portion Size Me” with his mom, Alexandra Reid (Marshall has stated when interviewed that he came up with that approach after seeing “Supersize Me” and wanting to change his family’s habits).

Epicurious put together for release a free downloadable digital ecookbook celebrating the Healthy Lunchtime Challenge, including the chosen 54 recipes plus some special photos commemorating the first ever Kids’ State Dinner luncheon. The cookbook was available at the former letsmove.gov site and USDA.gov site, as well as was scheduled to be available through other affiliated sites. Previous availability leads were at www.recipechallenge.epicurious.com, as well as USDA.gov, and Ed.gov per se.

Previously, both the Let’s Move site and the Epicurious site had a listing of all 54 budding junior chef winners by state, including identifying by name their winning recipe(s).

You could previously find some additional healthy recipes from the Healthier US School Challenge Celebration from back on Oct 17, 2011 at the choosemyplate.gov website or some winning Recipes for Healthy Kids Competition from the USDA Food and Nutrition Service website, or even a June 2011 choosemyplate.gov tip sheet mentioning “10 tips for making healthy foods more fun for children” called Kid-Friendly Veggies and Fruits. (Smaller image of “kid-friendly veggies and fruit” property of choosemyplate.gov and shown here for identification purposes only).

You may recall that earlier in 2012 the book “American Grown: The Story of the White House Kitchen Garden and Gardens Across America” was released.  Beyond descriptions of the First Lady’s own background and subsequent development of the White House Kitchen Garden, it also features photos of gardens by seasons from Spring, through Summer, Fall and Winter. Additionally, it includes a series of recipes as well, including an All-American Apple Cobbler, White House Summer Chopped Salad, a Cauliflower Mac and Cheese variation, and a First Lady’s Minty Spring Pea Salad, etc.  What’s interesting is that the recipes coming from the 2012 Healthy Lunchtime Challenge that were developed by children and their families across America show as much if not even more imagination and variety than those in the now well known White House developed book.

In terms of the Healthy Lunchtime Challenge, it was exciting and heartening to see so many young people connecting to preparing real food in their home and even school or community, etc., settings with their own families and friends.

These budding young junior chefs have been an inspiration to us all as they understand something that many adults in America seem to have forgotten: real food can make a profound difference in the quality of people’s lives.

We can only hope that more Americans take notice and take that real food message to heart.