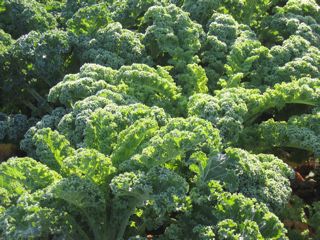 Do you remember hearing or reading about the First Ever White House Kids State Dinner (actually a luncheon) served on August 20, 2012?

A blog post of that date focused on the event since we feel the entire Let’s Move campaign being supported by First Lady, Michelle Obama, is such a great idea!

The entire Healthy Lunchtime Challenge culminating in that White House Kids State Dinner event was a collaborative effort involving a number of partners.

(Image of organic curly kale courtesy of Ayla87 over at rgbstock.com)

The “appetizer” for the actual White House luncheon event was a super simple Kale Chips recipe originally submitted by one of the 54 winning junior chefs, Samuel Wohabe, age 9, from the state of New York.

Kale Chips could prove to be a great anytime snack, so since this is back-to-school time and cooler weather is either in your area or might be coming to it, we thought this would be a great time to mention about various kale chip recipes that can be found all over the world wide web.

Since the Kale Chips recipe served at the White House was in honor of celebrating the successes of all the Let’s Move Healthy Luncheon Challenge participants and winners, you can find that recipe in the Let’s Move sponsored Healthy Luncheon Challenge Cookbook edited by Epicurious staff. By the way, Samuel Wohabe‘s entire submission was for “Fish-Fueled Pepper Rocket with Kale Chips and Quinoa.”

The Editorial Team staff at Epicurious noted that they took the liberty of slightly adapting some of the recipes submitted for that Healthy Luncheon Challenge before they were published as a cookbook, since as they put it they wanted “to ensure the dishes are as nutritious, fresh, and tasty as possible.”

The actual luncheon menu served at the White House on August 20, 2012 included:

Even the centerpieces for that event featured fruits and vegetables, along with more typical flowers.

There truly are a multitude of kale chips and related “vegetable chips” recipes that can be found all over the world wide web. Who wouldn’t be interested in giving a recipe a try that could potentially be affordable, delicious, and healthier?

Kale is one of the healthiest, dark green colored cruciferous vegetables. The three main varieties sold are curly kale, ornamental kale, or even Tuscan kale aka “dinosaur” kale.

Kale is a well-known source of antioxidants such as lutein and zeaxanthin, along with Vitamin A, Vitamin C, Vitamin K, Calcium, Manganese, Potassium, etc., and you’ll also pick up some fiber, carbohydrates, and the amount and type of fat, as well as protein you pick up will depend upon the recipe and serving size you choose, as will the amount of sodium you obtain as well.

A “tapas” size serving might be a nice handful, while a “snack size” serving might be double that. As a general rule of thumb, snacks should typically be in the range of 100-200 or maybe 250 calories, but usually not more than that.

Some recipes will call for x bunch(es) of kale, while others will talk about torn pieces of kale, stems and ribs removed, measured as cups of kale.

1.5 cups of torn pieces of freshly washed and dried kale (patted dry with paper towels, salad spinner spun dry or air dried), with stems and ribs removed, when prepared according to a modest fat content (0.75 tsp healthier oil) in the recipe should come in at under 100 calories; while 3 cups of prepared kale chips with a modest amount of fat (1.5 tsp healthier oil) used in the recipe should come in under 200 calories. Using a spray mister to apply the healthier oil may work better than drizzling on the healthier oil choice, depending upon your own personal experience and choice.

The prepared kale leaves are spread out over a large baking tray and recipe instructions will vary mentioning oven temps ranging from 200°F – 400°F with a key concept being the kale leaves should somehow be dried after washing (either patted dry with paper towels, placed in a salad spinner and thoroughly spun dry or else air dried), and then once dry otherwise prepared before baking the kale pieces off in an oven.

Keep in mind that any excess moisture present on the kale’s surface will cause the kale to steam and be limp rather than become really crisp.  Typically slightly higher healthier oil usage on the patted dry, spun dry or air dry kale pieces all spread out on a lined baking sheet ideally not overlapping and not touching will result in crispier kale chips. It is a challenge to keep piece size more even, but doing so will result in more uniform chips. Ideally prepare only what will be used at one time as most devotees claim that kale chips usually don’t hold all that well for later consumption even in an airtight container.

Below are links to another ten kale or collard chip recipes (in addition to the one mentioned above which was served at the White House) that you can try yourself with varying levels of written and graphic instructions (even including some with video footage) that you might find enjoyable to browse through:

You can see an image of what was served at the White House by checking out the Menu Inspirations board on Pinterest or by going to see some copyright protected photos found in a photo essay by the Washington Post–look for photo number 9.

Remember that you can try a variety of toppings on them for “seasoning” and “flavoring” purposes from Asiago, Parmesan or Romano cheese; to cayenne or other ground pepper; chili powder; cumin; garlic powder; smoked paprika; and some folks even like a flavored vinegar mixed into the extra virgin olive oil or applied as a wash on the kale pieces before baking them off.

Give homemade Kale Chips a try this week–you might be pleasantly surprised. After all, the kids attending the First Ever White House Kids State Dinner gobbled them up!