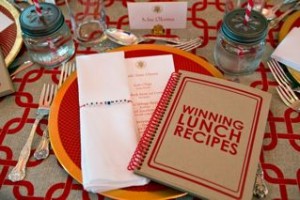 Plans were underway for the year 2013 (2nd annual) Kids’ State Dinner aka celebration of the Healthy Lunchtime Challenge promoted by Let’s Move.

(2017 UPDATE NOTICE: Unfortunately, the Let’s Move website is no longer active since Michelle Obama is no longer the current First Lady.

You may find that previous availability of recipes and information from the Let’s Move program may have been scrubbed from other government related websites as well.)

Winners of the recipe contest were announced around late June 2013, although winners in some cases received some local celebrity in their home town locations in advance of the announcement.

We had written about the 20AUG2012 1st ever White House Kids’ State Dinner because we thought it brought positive attention to a worthy subject. The dinner (held at lunchtime) celebrated the nation-wide Healthy Lunchtime Challenge open to “junior chefs” between the ages of 8-12.

The challenge gave children an opportunity to compete via a “healthy” recipe submission in order to represent their part of the nation. Any child within the age range could submit a healthy lunchtime recipe developed to adhere to the Let’s Move initiative promoting USDA’s My Plate, which is based on the 2010 Dietary Guidelines for Americans. Since the goal of the challenge has been and continues to be to encourage younger Americans to build healthier meals, the rules for entry submission included that any entry (single dish per se as part of a balanced luncheon meal) must represent at least one of the 5 key food groups (fruits, lean proteins, low-fat dairy, vegetables, whole grains) recognizing that approximately half the entire luncheon meal plate with featured recipe must incorporate veggies/fruits.

The 2013 nationwide recipe challenge was announced back in April 2013.

While professionals had been busy preparing for eventually issuing what was the backgrounder for the 2015-2020 Dietary Guidelines for Americans, children (along with their parent/guardian) from all over any part of the United States submitted their recipes for the Healthy Lunchtime Challenge aiming to conform to the 2010 Dietary Guidelines. The cut-off date for submissions was back on May 12. Once again the submission site was Epicurious.com and per report came in from all 50 states plus the District of Columbia, Northern Mariana Islands, Puerto Rico, and the US Virgin Islands, with only one potential winning junior chef per each of those locations.

Judging was apparently challenging in and of itself. There were over 1,000 entries that come in. Sam Kass (who has been a White House chef as well as Executive Director of Let’s Move) was one of the judges tweeting from the tasting session back in May. One Tweet included a photo from right after the judging. Others joining him in judging included Tanya Steel from Epicurious.com, along with staff from USDA as well as the U.S. Department of Education, plus a chosen child judge.

As was the case in 2012, a planned free, downloadable and printable eCookbook was offered featuring the winning recipes along with some nutritional analysis information, drawings, and photos from the White House Dinner event. Sites that were scheduled to be hosting the 2013 eCookbook included the former LetsMove.gov, USDA.gov, ED.gov, as well as recipechallenge.epicurious.com.

The dinner (aka luncheon) was held right at the White House (just the way State Dinners are) prepared by White House culinary staff. Mrs. Michelle Obama was in attendance. In 2012, President Obama made an effort to stop by as well. The program allowed the winners–up to 56 children (along with a parent/guardian per child) to travel by air in order to participate in the event, enjoying hotel accommodations provided in the area.

Previous, photos from the 2012 Kids’ State Dinner event and details from the 2013 Kids’ State Dinner event were available. For a link to the 2012 eCookbook from that year’s challenge and some other free “Kid Friendly” eCookbooks, check out our 20AUG2012 blog post on same. If you desire additional inspiration, the Academy of Nutrition and Dietetics’ Kids Eat Right site is also available to you.