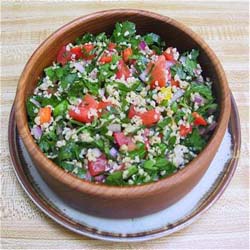 This salad favorite is perfect for late “springtime” or else “summertime” enjoyment. We look forward to eating every year (especially at a “BBQ” type event).

Once mint is again growing in the garden, it is time to make Tabbouleh!

Tabbouleh is a classic chopped vegetable salad of which there are many variations, depending upon where in the Mediterranean or Arab/Middle Eastern world the recipe version originated from.

This vegetable salad is built on lots of flat leaf parsley, some type of scallions or sweet onions, varying amounts of rehydrated bulgur wheat (translation from Lebanese would be burghul/burghol), and a dressing based on olive oil and lemon juice.

From there, many interpretations of what else should be in the salad abound. In a way, it is a “modular” salad since as long as you pick something from at least a minimum number of categories and avoid having soggy bulgur wheat or other grain in it, you can’t go wrong and you can make the salad your own in the end!

The Lebanese people in particular take great pride in their Tabbouleh versions and actually even have a National Tabbouleh Day, organized by Lebanon’s first organic farmers market in Beirut and now celebrated on the first Saturday in the month of July.

In the Greek/Turkish/Arab/Middle Eastern world, Tabbouleh is often served as part of Meze/Mezze/Mezzeh/Mazza, involving very large platters/trays containing various size portions of a number of food items (cold or hot, savory or spicy) as in appetizer size “Mazza for two” or in serving dishes set out to feed an entire table of family members and/or guests where each person has their own personal smaller plate. 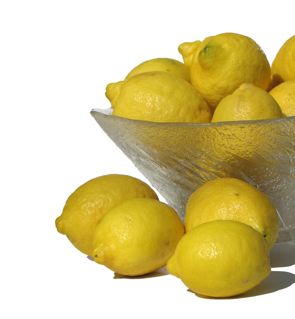 The use of LOTS of parsley makes this salad not only quite a healthy choice, but also a great palate cleansing choice. Lemon juice along with parsley does wonders to refresh any palate.

Be sure to use FRESH lemon juice and not bottled lemon juice! Thinner skinned lemons will usually yield more juice per lemon than thicker skin lemons will.

Coming from an Italian heritage, our preference in this instance for this salad is to use flat leaf Italian parsley. Larger parsley leaves can be quickly picked off of stems and then we stack the leaves and use handy separating style kitchen shears to cut them up.

We also urge you to use fresh mint in this salad as it does make a difference in the final flavor profile for this salad served at room temperature only after the flavors have mingled in the refrigerator for at least 4-6 or so hours or overnight.

Other recipe versions might use seedless cucumbers, etc., in the salad.

Since we didn’t have scallions handy at the moment, we went with some minced red onion instead. You have some flexibility in your allium choice–just be sure to use a “sweeter” type of allium, but definitely NOT garlic. Scallions/green onions are preferable, but other substitutions could include Vidalia onions, sweet Peruvian onions, etc.

We also love tomatoes in this recipe. Although some folks like to use cherry tomatoes, halved, we like to remove the seeds from Italian Roma tomatoes instead. Whatever tomatoes you might use, just make sure they are really ripe before adding them to this salad.

Another variation of this recipe is to add a bit of fat-free crumbled feta cheese which we have done to have a rounded out snack/luncheon meal. We add that at the last minute to the portion we have placed in a personal salad bowl as shown in the photo above.  Note that often we don’t add salt to the recipe, but the sodium content of the fat-free feta cheese can be appealing in this dish.

When delis, etc., in the USA make this type of salad, they tend to use much more grain proportionally than is desirable, so be aware of that. This should be primarily a vegetable salad with a little grain, not vice-versa.

For a cool summertime salad, try some refreshing Tabbouleh salad–it really is worth the effort to make your own!

(except celery, red bell pepper, and tomatoes): Very finely mince (1/8″) these using a French Chef’s knife, kitchen shears, or a hand operated chopper or electric food processor, then combine these together in a medium bowl:

DRESSING: Whisk these ingredients together until smooth: